“Together with Citizens in fighting all forms of Gender Based Violences”

Women, children and senior citizens are among the most vulnerable populations in the world suffering the most from poverty, social disparity and illness. Despite their pervasive role in the society, far too many numbers of women, children and senior citizens are at risk due to lack of basic care and support. Thus, this group needs special protection and care from all forms of violence and discrimination.

Nepal as a signatory country of the UN Convention on Elimination of All Forms of Discrimination against Women (CEDAW) and Convention on Rights of Child (CRC) is legally obliged to provide protection and fair treatment to women, children and senior citizens at all levels.

Women, Children and Senior Citizen Service Center (WCSCSC) (formerly known as Women Cell) was established within Nepal police in 1996 as a pilot project in four districts (Kathmandu, Lalitpur, Kaski and Morang) and one at central level in Police Headquarters as governing body. This was the first ever initiative from Nepal Police in compliance with various UN conventions, guidelines, resolutions, national policies, act, as well as the recommendations of Police Reform Commission.

Our Area of Work: 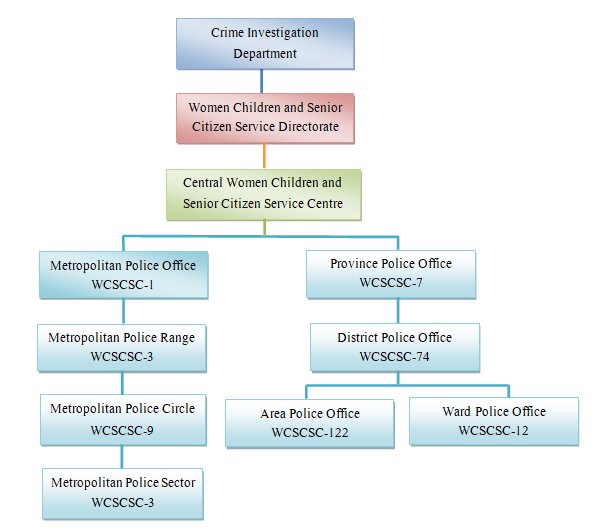